Buford Grymes was active in Democratic politics in Richmond, and then appointed as clerk to the City Treasurer. He served as the party superintendent of the Madison Ward, resigning that position in 1888 after being recommended by the party for selection as clerk. He was well-connected, and elected secretary of the Powhatan Club (with a membership of 500 Democrats and purportedly "the most important and powerful political organization in the State") in 1889.1

the Buford Grymes trail occupied all eight columns on the front page of The Richmond Dispatch on May 15, 1891
Source: Library of Congress, Chronicling America: Historic American Newspapers

Just What Did "Uncle Buford" Do?

The secret of "Uncle Buford" went to the grave when his niece Catherine C. Grymes died in 1985. Her brother, Thomas Stokes Grymes, used to joke that when family parties began to drag and needed a little more energy, he would nudge his sister Kate and ask again "What exactly did Uncle Buford do?"

He claimed no one in the family would share and he never knew the secret, though he may well have just been teasing his sister. Uncle Buford was the black sheep of the family, but his failings remained unknown until the Library of Congress posted old newspapers on its Chronicling America site. The March 8, 1891 edition of The Richmond Dispatch and other articles reveal the story.

Buford Grymes was clerk to the Treasurer of the City of Richmond, starting in September 1888 when he was only 32 years old. He was been elected by the City Council to that position, not hired by the Treasurer, for what was supposed to be a three-year term. He began to serve after obtaining a $5,000 bond so the city was insured if there was malfeasance in office. He was elected again in 1890 for a second two-year term, because the City Council repeated its mistake about the length of the term.2

He was accused of stealing money from the city, though in 1891 his salary was $1500 annually. The first charge was that Buford Grymes had forged the Auditor's books to indicate that on February 24, 1891, four gas bills for the Thalhimers Brothers store and homes had been paid, but he had put the cash into his own pocket instead of the cash drawer for the city.

When city residents paid their bills for gas and water or the fees due to the city from public markets, clerks in the Treasurer's office gave receipts and entered the payments into official account books. At the end of the day, the cash in the money drawer was matched with the total of receipts issued and recorded in the books. If there was a discrepancy, the clerk and the Treasurer would review the records until the error was discovered. It was common that the numbers did not match exactly. Sometimes the clerks would not give out the correct change, and at times busy staff would be interrupted and a payment might not be recorded.

Buford Grymes gave receipts for the payments of the Thalhimers bills, but failed to record the payments in his account book. As a result, at the end of the day on February 24 no money was "missing." In fact, there was an overage of $5.44 for that day, presumably because one or more payments had not been documented.

Richmond had a system of checks and balances to prevent embezzlement, with separate records kept in the city's Auditor and Treasurer offices. Buford Grymes had not recorded the bills or payments from others besides the Thalhimers. To prevent discovery that he had stolen the cash, he had somehow obtained access to the Auditor's books and altered them to indicate the payments had been received.

However, the handwriting of his numbers in the Auditor's books was distinctly different, and that drew attention. A quick examination by the Auditor of the separate set of books recording gas payments in the Treasurer's office revealed the inconsistent records.

Grymes was arrested on March 4, 1891 and suspended from his position with the city. He resigned the next day, and also resigned his position as Secretary of the Powhatan Club. His brother, Peyton Grymes, tried to repay the missing funds on March 7, but the City Treasurer refused the offer.

At one point, Buford Grymes faced charges on eight counts that each involved a prison sentence of five years, so potentially he faced spending 40 years in the penintentiary. The original indictment of forgery was later revised. The prosecution ultimately presented a case based on embezzlement, separate from the Thalhimers gas bills.3

The Richmond Dispatch recorded that brothers Peyton and Robert Grymes attended Burford Grymes' preliminary hearing, along with at least 30 "well known" people in Richmond society. When released on $5,000 bond, three people volunteered to assure he would appear at trial. President of the Common Council Thomas P. Campbell, brother-in-law E. B. Thaw, and S. M. Page served as his sureties before trial in the Hustings Court, guaranteeing like a modern bail bondsman that he would not flee.

It cannot be truthfully said that Mr. Grymes's friends deserted him in the hour of his need. On his way in and out of the court-room yesterday hands were extended to him from every side.

Few words were exchanged, but it was one of those cases where actions speak louder than words...
All seemed to feel that a friend was in trouble, and whether he was guilty or not, were sorry to see a young man whose future had promised so much in such a plight.

Buford Grymes lived at the corner of Fifth and Clay streets in Richmond, but after his release he went to the home of his brother-in-law E. B. Thaw at Big Island in Bedford County. The Commonwealth's Attorney and others involved with the case knew he was there.

The willingness of his friends to guarantee appearance at trial faded, and Thomas P. Campbell and and S. M. Page revoked their commitment as sureties. One newspaper reported the rumor that he had left Big Island to visit Charlottesville, while another suggested the friends had finally become aware of the scope of his embezzlement.

A police sergeant was sent to Big Island to bring Buford Grymes back to Richmond on the Chesapeake and Ohio Railroad train. On April 11, he was incarcerated in the city jail. He was in custody for 10 days, then released again on bail - guaranteed by a different surety - before his trial on May 11-14, 1891.5

Local Hustings Court Judge Samuel B. Witt acted as the new surety for his friend. That action disqualified Judge Witt from hearing the case. He withdrew, and Judge A. M. Aiken from Danville was brought to Richmond to preside over the selection of the jury and then conduct the trial. The case was a local sensation, with a Richmond paper noting:6

No case within the past five years has caused so much comment and interest...

Because Buford Grymes was known by so many people in Richmond, many of the potential jurors stated that had already formed firm opinions and the normal pool of jurors was quickly exhausted. The judge ordered 100 men be called for the case, and 75 were examined before a 12-person jury was chosen.

One was a "colored man," and he was dismissed as were many others who stated that they had already formed an opinion. An Alexandria paper reported that at the start of the trial:7

Much difficulty was found in obtaining a jury.

The report in The Richmond Dispatch noted that his mother and wife both attended the trial. Testimony revealed that when the Auditor's investigation uncovered the inconsistent records and missing money, Buford Grymes reportedly said that he was "in the hole." He sought to repay the money and abandon his position, but hoped to avoid further punishment by saying:8

I will resign and give an order on my salary for the amount. I must have done this when I was asleep.

The Auditor declined the invitation to sweep the problem under the rug, and instead had the clerk arrested. He was initially charged with forgery, then the charge was altered to embezzlement. Both were felony charges.

The defense established during trial that other people had access to the cash drawer and used it to make change at times, and that at times one person in the Treasurer's office would issue receipts for payments while another person would enter the payments into the account book. The intent was evidently to create reasonable doubt that Buford Grymes had intentionally embezzled the funds.

Failing to record the payment might have been a simple business mistake. It would have been caught at the end of the day when cash in the drawer would have exceeded the recorded payments, but someone else could have stolen money from Buford Grymes' drawer on that particular day. It was a thin defense, and not successful. Neither was the effort to define the Treasurer as the person responsible for collecting payments and documenting receipts, so therefore the clerk could not be held accountable.9

An accountant testified during the trial that while the books that recorded payments and cash in the drawer each day might match, the bank deposits made by the Teasurer's office also were inconsistent with the total of recorded payments. The clerk was originally questioned over a total of just $64, but an audit indicated over 300 discrepancies and a total deficit of $2,436.79. Buford Grymes may have been embezzling $60-$70/day, and the audit stated:10

Mr. E. B. Grymes has been guilty of a long-continued course of crime, resorting to almost every known method by which accounts could be manipulated for purposes of fraud. 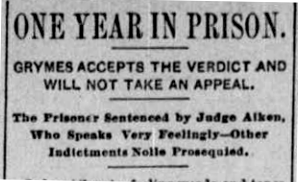 The jury rendered its verdict on Thursday, May 14, 1891, after less than 20 minutes of deliberation. It recommended "Uncle Buford" spend a year in jail.

As reported by the The Richmond Dispatch, Peyton Grymes had attended the trial in support of his brother every day. He was in the courtroom on Friday when Judge Aiken formally pronounced the sentence, but Buford Grymes' wife and mother did not appear on that day.11

Several warm friends of the prisoner came in and pressed his hand in silence. Grymes seldom raised his eyes to meet the curious glances of the large number of spectators present or to look into the faces of those whose hearts beat with sympathy for him. He was indeed a miserable man, and his features told of his great mental agony...

Mr. H. M. Smith, Jr., who has so ably managed the case for the Commonwealth, although a warm friend of the young man whom it was his duty to prosecute, walked forward and shook hands with Grymes and his brother, and in a low tone whispered a few words of sympathy for them. Both seemed deeply moved at what Mr. Smith had said.

Buford Grymes spent 10 days in the local jail, prior to his transfer to the state penitentiary. His stay in the local jail was extended another week after 842 people (including all members of the jury that had returned the guilty verdict) signed a petition to Gov. Philip W. McKinney asking for pardon or commutation of the jail term.

The governor rejected the request, and Buford Grymes entered the state penintentiary on June 2, 1891. Gov. McKinney also rejected a later request from Judge Aiken in March, 1892 to commute the sentence near its end.12

The conviction stained the family reputation for many years afterwards, if the response of Catherine Grymes is to be believed - though her Uncle Buford was convicted eight years before she was born.